For once it doesn’t feel like I just wrote last month’s update. That probably has to do with the fact that I didn’t just write the last one two weeks ago! I’ve been keeping notes and March was good. We traveled and had new adventures and experiences. Bigger steps and longer arms. Week by week slowly shedding his baby traits.

At the beginning of March Gabe and I headed down to Southern California for a week. There was a conference I wanted to attend and I thought it would be good for him to spend some time with my family. It was our first solo road trip and he did great. I chose to drive through the night and he slept through most of it. Gabe had so much fun playing at my parents house. They have so many interesting things for kids to get into. He got to run around the trampoline, push the wagon, play the harp, harass the little dog, and play with all kinds of random toys previously used by his cousins. We also got to spend some time with family and had some play time with cousins. The trip also proved to be a nice break for me. While I attended the conference my mom watched Gabe. It was great because it was his first time being away from me for extended periods of time without Will around. Even though I was back each night, it was good for both of us. Sometimes you just need a change in scenery.

It’s amazing how quickly Gabe went from crawling up the little steps at the park to trying to take big steps up the big stairs at the park. I kid you not. I’m holding his hand for support and he is stepping up like he knows what he is doing. On the smaller steps, if he can find something to grab onto, he will support himself and take the step up. He has come around to swinging… took him a little bit to catch on but he enjoys it now. He also loves going down the slides. Play is such a huge part of our day… solo, with others, with me, being challenged… it makes him happy.

He’s been expressing some of this happiness vocally. Especially in the tail end of March. He squeals with delight when we play… when I chase him or tickle him. Sometimes I can’t help but wonder what the neighbors think! But it is all good to have an expression of joy. He’s also quite fluent in “ma” “da” and “ba” sounds. And those I can’t put words to. He can say “mama” and “dada” and I think he is slowly starting to associate the names with us. Because he hasn’t made the association, Will and I both agree that despite making the sounds he hasn’t said the words. I know that kind of doesn’t make sense but I’m going with it.

Out of the blue he started “dancing a jig.” I’m not quite sure what it is but he will start stomping his feet up and down… especially when he stands on the side table. It’s like he realized how much more control he has over his legs or he’s excited or it’s just darn cute and it doesn’t matter why he is doing something. Another big thing he started doing is pointing. It was so out of the blue but you immediately knew what he was doing. He points a whole lot more than he jigs but it is neat to see himself express himself in this way. He also seems to have grown long arms. This kid can reach things!!! Standing up on his tip toes and all. Now I don’t think he has extra long limbs by any means, it’s just surprising in a way that I now have to move anything on the desk or a foyer table much further away because he can totally grab it. I really want him to lose interest before we have to hide the keyboard and mouse for the desktop.

Thirteen months into this and Gabe came down with his first set of fevers. Not really sure what it was but for four days he had a fever every 12 – 24 hours. Thankfully we were able to control them and didn’t need to go into the doctor. Though I did call and got some parameters to watch out for. He did get picky with his food but he still ate and still drank. Overall I think he weathered it well. Hopefully we won’t have a repeat anytime soon.

I think we have finally reached a point with his books that I can trust him to play with them. Up till now he has mostly eaten them if I leave them with him. But I’m starting to notice a shift. He is tuning in a whole lot more when I read to him when he drinks his milk. I pulled out all his books and lined them up by the rocking chair in his room. Since doing this he enjoys running over there and pulling books out onto the floor. Sometimes turning pages, sometimes not. I’m just super glad to see him start to take an interest. Reading is so so so so so important. I also indirectly set up a little reading spot in his play yard. A pillow against the wall and his sheepskin rug to sit on. Wolfgang and a blanket to the right and a pile of Dr. Seuss board books to the left. Low and and behold, he randomly goes in there, sits down, and grabs a book… or a toy or plays with something he brought in there. I wholeheartedly approve.

Easter snuck up on me. I think it did more so because I wasn’t hosting it and I didn’t really have anything to prepare for it. So I totally failed in the “planning ahead/being intentional in how we celebrate holidays” department. It did though challenge me in how we will move forward with this holiday for us as a family especially in light of the history of Easter. I’m not sure what Easter traditions we will start but I do know some will revolve around food. Italian Easter Bread made an appearance this year. In any case, we celebrated with friends. Friends we’ve actually been celebrating Easter with for most of our time on the coast. It was wonderful. It’s especially meaningful when you have kids and they can play together. Gabe’s heart was so full from an evening of playing with Djuna. I did spend most my time chasing after Gabe and lost my drink I don’t know how many times. But tis the season right now. My consolation? The chocolate bunny Miss Liv gave him. :X 😀

It makes my heart happy to see him so filled up.

Often when I write these posts I either write the text first and then go collect and edit the photos. Or vice versa. Along with keeping small notes about the month, as I’m sure I’ve mentioned in the past, photos really help jog my memory. As in the case of this month (writing first, photos later), my memory has been jogged a bit.

Sometimes the photos I take have a story behind them, other times they don’t. Post bath photos? No story there, I just think he looks ridiculously cute wrapped up in his fox towel. Peeling the paint off the door? That one isn’t his fault. I expressed a condensed version of my frustration over on Instagram. Socks behind the crib? That is simply a mom’s never ending journey to find all the socks! But the photos out amongst the green mustards? That was my attempt to take some better pictures. Albeit, not so great pictures that I didn’t get a chance to go retake with some adjustments in mind. But I was inspired by watching Michelle during Gabe’s one year shoot. I know if I actually put some thought into it (wait there is time for thought???) I could be taking much better pictures. I also finally changed lenses. Yeah, should have done that a while ago. Different subjects/settings have very different needs. I also wanted some decent photos of him in that shirt. It’s my favorite and he is quickly growing out of it. There is a story behind the one of him sitting behind the tv console and sorting the spice drawer. If I didn’t have these pictures these moments would be lost. I don’t know if it will really scale in the long run. I know I’ll forget. We can only hold so much information. But they are there and I can smile at them. 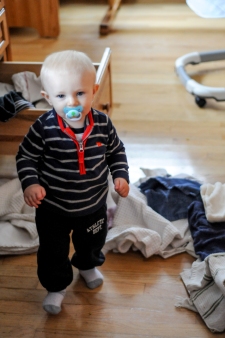 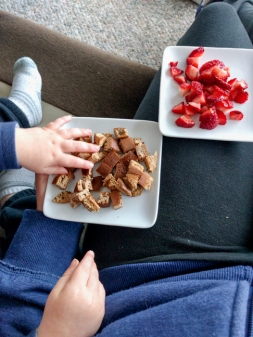 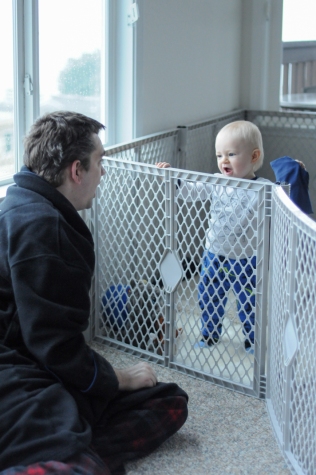 Fun toys at the park 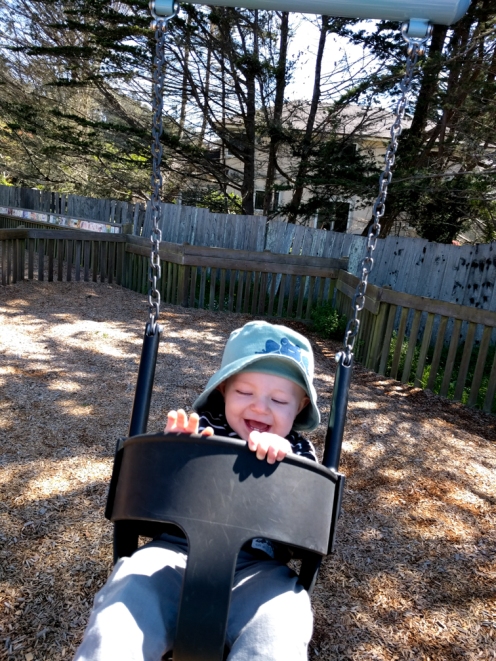 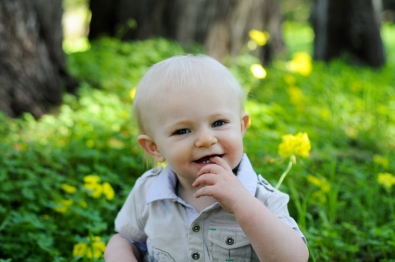 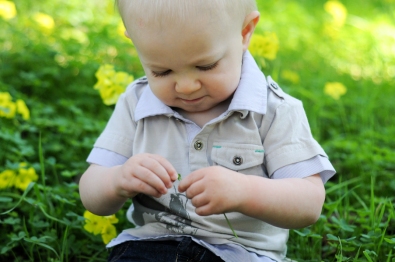 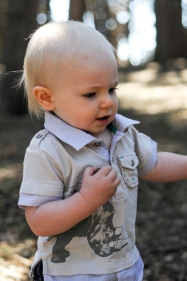 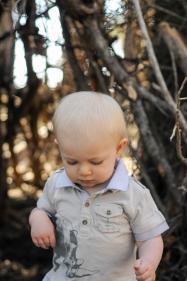 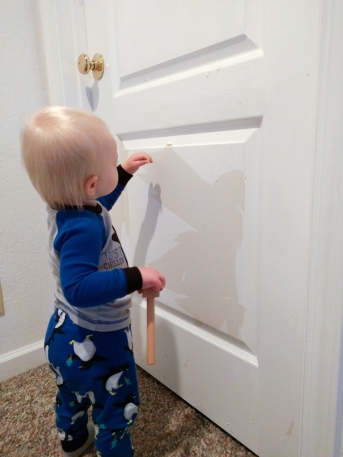 Don’t mind me… I’m just going to push the play yard over.

Carrying the broom around

Excited to climb on furniture 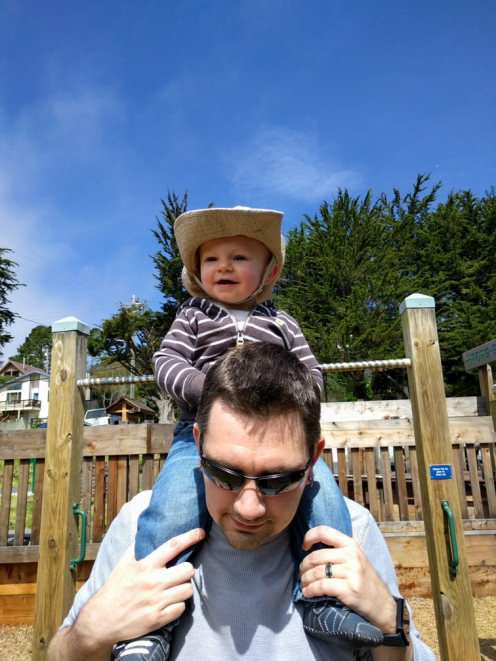 Playing in the park 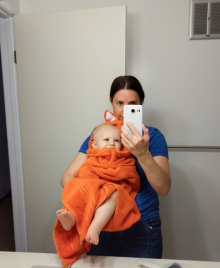