What can I say about five months? Leaps, bounds and a sleep schedule that got turned upside down. After the last update we really started finding a groove but right when things were good there was this slow progression into upside down. I’m learning that transitions are the things that throw me off. When things go from not bad to WTF and leaves you scratching your head. Welcome to parenthood, ehh? Despite there have been lots of great leaps and bounds… which is exactly why things went upside down in the first place. That whole growth and development directly related to fussy/sleep changes stuff. Growth at this rate has me wishing I would have been doing monthly updates rather than every two months.

Gabe has upped his vocal game. The “ooo’s” and “ohh’s” have turned into giggles, shrieks, laughter and exclamations of glee. He still of course coo’s and makes his vowel noises. But his expression really depends on his mood and who is playing with him. I usually get the best laughs out of him after second breakfast when we change out of pj’s. But if you really want to hear him laugh watch Will “om nom nom” on him. Shrieks of delight. Isn’t it interesting that you don’t have to teach babies to be ticklish? And why is it so funny? And how do we reach points where we hate being tickled when we get older. Anyways, I digress.

He is starting to ramp up to perpetual motion. He is no longer a baby who just lays there. All that hand eye coordination stuff is happening. It started with noting a few random times he wasn’t in the place that we left him. And then he was no longer on the play mat. Then it was trying to learn forward and sit up. Next came attempts to get on his side and then finding him asleep on his side a few times. Then attempts to roll over from back to tummy. He spent quite a few weeks attempting to roll over. And for the sake of when I am publishing this blog post, he is now rolling over ALL THE TIME and loves sleeping on his tummy. He’s also doing quite well in doing 360 degree turns on his tummy as well.

For the first 4 months we chose to co-sleep with Gabe. It is something I am really glad we did because it made sense for us. But then there reached a point where we were hyper concerned about waking him up. As he started sleeping through the night suddenly things like Will’s alarm was a problem. I never had a set amount time I wanted to co-sleep and everything was pointing to moving him out. Before transitioning him out of our bed I started putting him down for naps in his crib. He had no problem with naps in the crib. And then we did it. Thankfully he did the first night in his crib with no problem and has been sleeping in it ever since. Getting him out of our bed also meant that I could remove every single baby related thing from our room!!! It was kind of funny how empty our room feels now that it doesn’t have all the things in it. All that is left is the baby monitor and we no longer have to worry about waking him when we get ready for bed or when we get up… though he is the one who gets me up in the morning.

Sleep is the name of the game

Seriously. Everything revolves around sleep and how rested he is. I think there has been as much change in sleep, if not more, as there was in his motor skills development. So first things first. Extended sleeping through the night! I say extended because 5-6 hours is the definition of “sleeping through the night” for babies. He started doing 9+ hours. It wasn’t terrible to get him to sleep either. And then something happened. I kind of felt blindsided by it because things weren’t bad and then all of a sudden they turned upside down! Napping started decreasing. Getting him to bed started getting harder. And after a good run of NOT waking up in the middle of the night, he started waking up in the middle of the night! It took a bit to figure things out but we are headed back in the right direction. Naps are still wonky and we are still working on some habits we didn’t expect to create. But he is sleeping through the night again and getting the right amount of total sleep for his age. I know though that we still have things to work through such as growth spurts, and whenever he starts teething but we are doing our best to stay on top of it and try to build a good sleep foundation for him. Sleep is complicated. That’s all I have to say.

All the other little things

He now grabs for his toes on a regular basis. I think once he realized how to maneuver his hips/legs with rolling over he realized he could do other things. He likes to drool on everything… no he is not teething. He also likes to stick everything in his mouth from his toys, to his hands, his clothes, burp cloths, etc. This kid likes to “nom nom nom.” Speak of noming, he has greatly taken interest in the things I eat. One afternoon while I was feeding him, I was really needing to eat so I grabbed an apple to eat while I fed him. After I took a few bits he stopped eating and was mesmerized by me eating the apple. He wouldn’t go back to eating till I stopped. I definitely think he will be ready to experiment with solids once he hits six months.

I’m sure there is a whole lot more I’ve missed but we are going to call this good. I’m not sure why but I am looking forward to reaching the six month milestone. 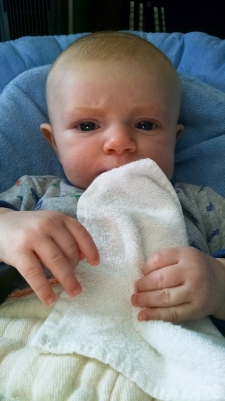 Who are you looking at?

Everybody in the crib!

Teddy bears and spit up 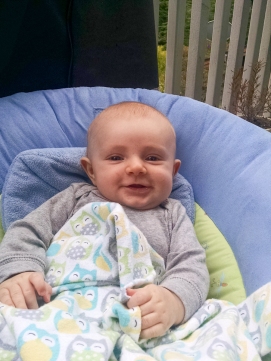 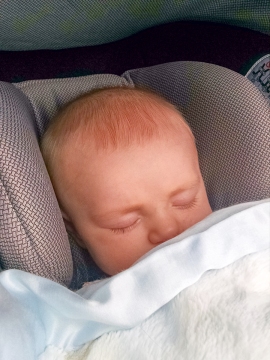 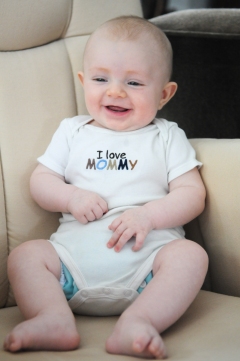 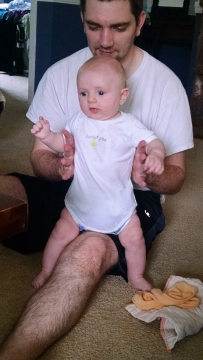 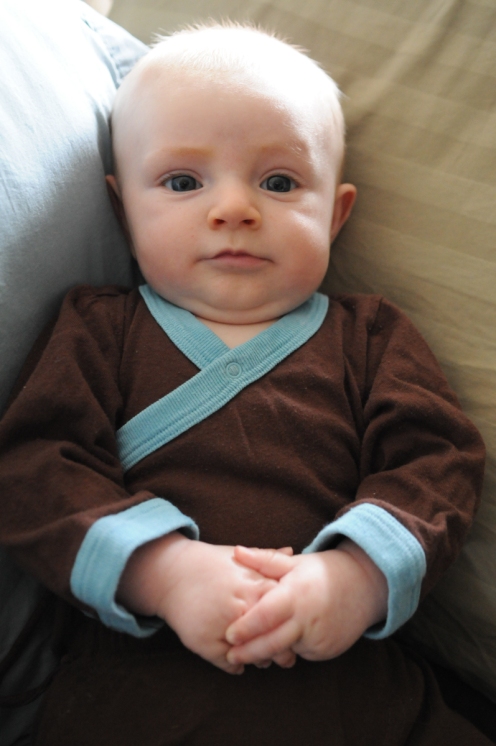 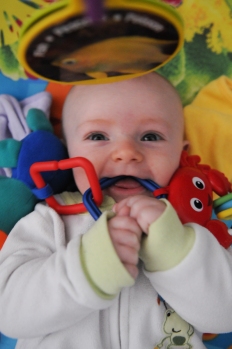 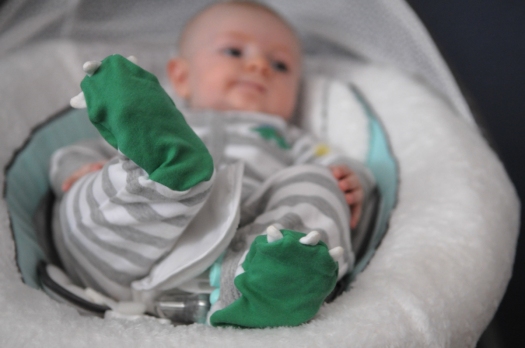 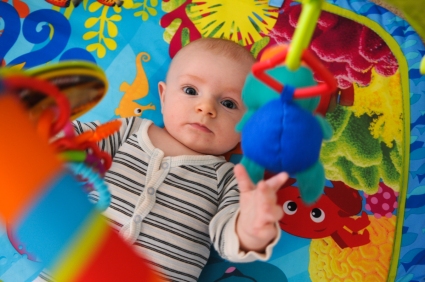 Why yes I will eat my play mat 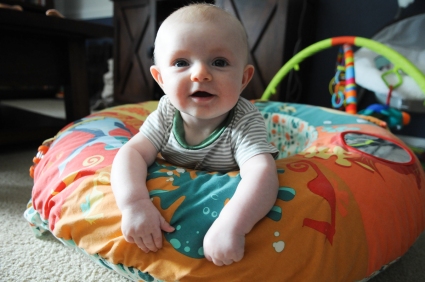 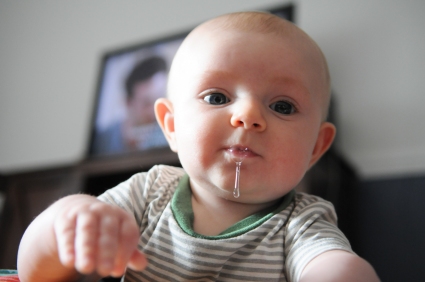 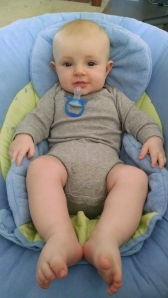 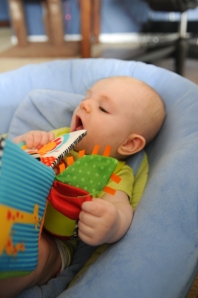 Working on this tummy thing 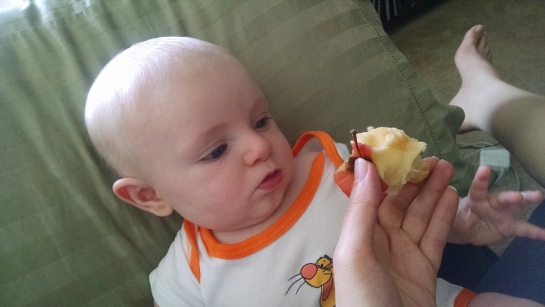 Can I have your apple? 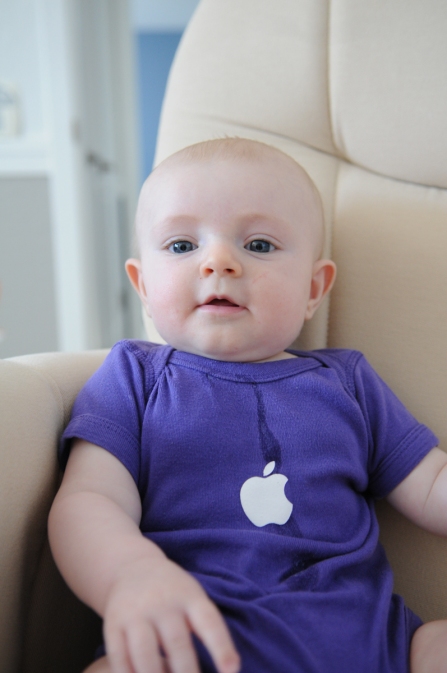 Bright eyes in the car