Alexander’s tarts… or another way to to look at them, iced raspberry pie crust sandwich tarts.

According to Beatrice Ojakangas (author of the Great Scandinavian Baking Book) they are named from Czar Alexander the II or Russia who ruled over Finland in the eighteenth century. While they are easy to prepare, I think I would serve these for an event or special occasion of sorts. They are dainty and feel like they belong with tea or coffee.

They being with the crust. Two 8 x 8 inch squares. I rolled out the first square on my silicon mat but because I made the dough a bit too dry I had a bit of difficulty moving it to the pan. That is, till I shimmied a piece of parchment paper under it and then lifted it to the pan. On the second square I simply rolled it out on the parchment, trimmed the edges, and voila.

It was a tight squeeze to get them both on the pan but it worked. Just be sure and leave enough parchment to grab onto when removing from the pan.

While the squares are cooling, grab the jam and prepare the icing.

The icing is a standard powdered sugar icing laced with almond extract. And for the jam, I played by the rules and went with raspberry… only because I wanted some raspberry jam in the house. Though I’m pretty certain any jam would work for these.

The next step is to place the second square onto the top of the one you just spread the raspberry jam onto. It feels weird. And kind of looks weird but that is what you do.

Now you can take all that icing and pour it on top. I found the icing to be just thick enough to not go running off the edges of the tart. It was actually very easy to use an offset spatula to spread the icing around evenly. 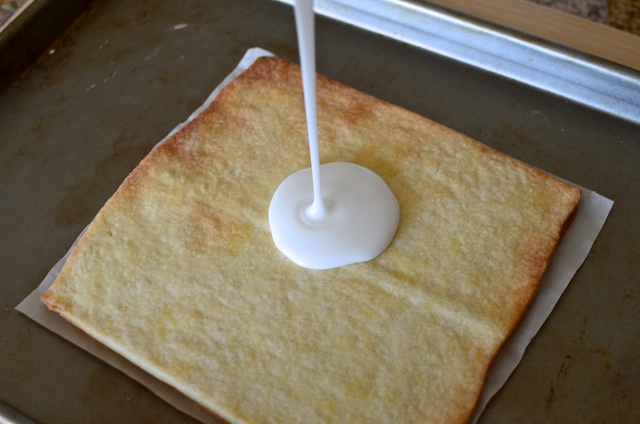 At this point you will need to let the icing set. I transfered the tart back to the baking sheet, covered it with foil, and let it sit over night. You probably don’t need to let it sit that long. Another way to possibly help it set faster is to put it in the fridge for 30 minutes to an hour. 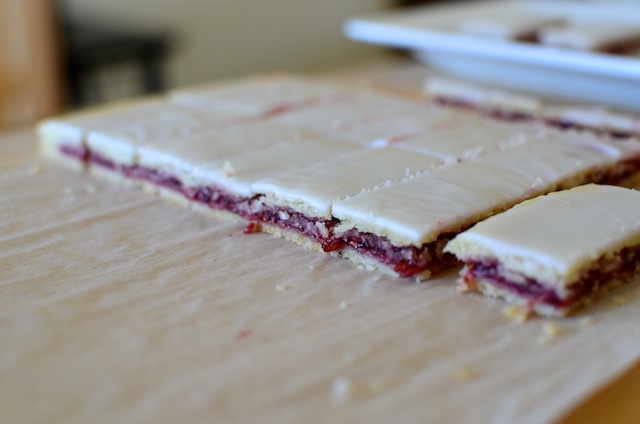 Cutting can be a little mathematical to get exact 1 x 2 inch rectangles. But this is where you take your time, cut it into quarters and then proceed cutting each quarter down to the desired size. It can get a little messy so I highly recommend using a very sharp knife and wiping off the blad after every cut.

And there you have it. Beautiful little sandwich cookies. Perfect with afternoon tea.

Whisk together the flour, baking powder, and sugar in a large bowl. Add the butter and cut in with fork until you have coarse crumbs.

Mix together the yolk and the water and then add it to the the crumbs. Mix together to form a dough. Add more water if necessary. Form into a disc, warp in plastic wrap, and chill for 30 mins in the refrigerator.

Preheat oven to 350 degrees and pull out one baking sheet.

Divide dough into two parts. Place a piece of parchment down on the board and lightly flour. Roll each part out to an 8 x 8 square, being sure to trim the edges.

Place the two squares on the baking sheet and bake for 12 – 15 minutes till just starting to turn golden. Cool on sheet.

Once cool, spread the raspberry jam evenly over the top one square. Then take the second square and place it on top.

Blend all the icing ingredients together. Then pour onto the top of the sandwiched tart. Use an offset spatula to spread the icing evenly over the tart. Let stand until the frosting has hardened.

Once set, use a sharp knife to cut into 1 x 2 inch rectangles. To get a cleaner cut, be sure and wipe off the blade after every cut.